First off, thank you to all of the veterans out there who keep us safe and preserve our way of life.  A bit of an abbreviated edition of Landmark Links today as I was too busy relaxing on the beach to write a full post.  I hope everyone enjoyed the long Memorial Day weekend as much as I did!

Lead Story… Back in April we linked to a piece from the Miami Herald about the Panama Papers, documents leaked from a sketchy Panamanian law firm that was helping all sorts of nefarious characters (including close associates of Vladimir Putin) purchase real estate in the US (mostly in Miami) through shell companies to evade taxes which put the issue of foreign investment in US real estate under a microscope.  We also posted a piece from the Wall Street Journal around that same time detailing how Miami was heading for another condo bust.  These two stories are now converging to wreak havoc on the high end condo market in Miami.  The main issue at hand is similar to what we have witnessed in the Coachella Valley for several quarters.  What happens when a market that is largely driven by foreign investors begins to slow or become over-supplied while said investors’ currency depreciates substantially against the dollar?  It leads foreign investors to sell, which is what they have begun doing in Miami in droves.  From Bloomberg:

Miami’s crop of new condo towers, built with big deposits from Latin American buyers and lots of marketing glitz, are opening with many owners heading for the exits.

A third of the units in some newly built high-rises are back on the market, though most are listed for more than their owners paid in the pre-construction phase. At the current sales pace, it would take 29 months to sell the 3,397 condominiums available in the downtown area, according to South Florida development tracker CraneSpotters.com.

With the U.S. dollar strong, South American investors who piled into the downtown Miami market after the real estate crash are now trying to unload their recently built condos, adding inventory to an area where 8,000 units are under construction and nine towers were completed since the end of 2013. Some are offering homes at a loss as demand cools. Condo purchases from January through April slid 25 percent from a year earlier, while the average price fell 6 percent on a per-square-foot basis, CraneSpotters data show.

“The problem is that investors are no longer buying, and now they’re going to be looking to sell,” said Jack McCabe, a housing consultant based in Deerfield Beach, Florida. “And what buyers are going to replace those other than vulture buyers looking for deals?”

Investors have much more at stake than the speculators who walked away from deals in last decade’s crash and left the market with thousands of unsold homes. In the latest construction boom, projects required cash deposits of as much as 60 percent, and contracts had stiff cancellation penalties.

Because owners of condos in new towers signed contracts over the course of a couple years, it’s difficult to know how many made purchases at prices above today’s values, said William Hardin, a professor of finance and real estate at Florida International University in Miami.

“The people who bought at the beginning are probably below where the market is today, but some bought later, at higher prices,” he said.

Unlike California, Florida allows pre-sales with substantial non-refundable deposits which are often put up long before completion in order for a buyer to tie up a unit.  In a hot market in a place like Florida, you literally can’t wait until the building is done or there will be no units left.  In a slowing market, not so much.   What happened here is that many South American currencies crashed against the dollar while the buildings were going up. This leaves a buyer who has a unit under contract in a situation where he or she needs to come up with substantially more cash in their native currency since the Miami condos are priced in dollars which have appreciated dramatically against said currency. However, the math works the other way if you are a foreign seller.  Let’s run a quick scenario and assume that you are a Brazilian investor who tied up a $1MM Miami luxury condo back in January of 2015 when one Brazilian real was worth about $0.40 meaning your condo unit would cost around 2.5MM real:  You had to put down 60% of the purchase price or $600,000 (1.5MM Real) in order to put the unit under contract.  If the real had stayed at that level, you would need to come up with an additional $400,000 or 1.0MM real to close escrow (net of closing costs).  Fast forward to May 2016 and the real has plunged against the dollar and is now worth about $0.28, meaning that the additional $400,000 will now take 1.428MM real in order to close – much more than you had bargained for.  But what if you could assign the escrow or flip the condo to a new buyer for the price that you are under contract for? You would break even in dollar terms (again we are not taking into account any closing costs) but you would have a substantial profit in Brazilian real terms just due to the dollar appreciation.  In fact, your your profit would be around 643k real which is an incredible return considering that your purchasing power at home is in real, not dollars.  Congratulations, you are now a successful (but extremely lucky) currency trader if not a very successful real estate investor.

It should be easy to see how this sort of dynamic could lead to the aforementioned 29 months of supply and there are going to be many, many cases where the buyer does not get out whole like our hypothetical Brazilian investor did, especially with so many new units coming to market and pricing already in decline.  As stated earlier,  a very similar phenomenon is occurring in the Coachella Valley due to the decline of the Canadian dollar – less buyers and many more sellers.  So what happens to those buyers who have to close on their properties because they are unable to sell their unit and get caught in the tidal wave consisting of 29 months of inventory?  They rent the unit out which works great when the rental market is strong but it’s already showing some serious cracks.  Again from Bloomberg:

The strong rental market is giving many would-be sellers the opportunity to cover their costs. But there’s also a flood of new, professionally managed apartments under construction. And apartment vacancies in the downtown Miami area rose to 11.8 percent in the first quarter, double the rate two years earlier, according to property-data provider Reis Inc.

“The ticking time bomb is based on rental rates,” said Peter Zalewski, owner of CraneSpotters. “When some of the foreign investors sitting on the sidelines have to dig into their pockets and subsidize renters, that’s the fuse that will lead to a correction.”

There is absolutely nothing wrong with foreign buyers purchasing homes, even a substantial number of them in any given city.  However, there is an inherent currency risk when it comes to foreign real estate investment that domestic buyers simply don’t have that can make them vanish quickly – or even worse become net sellers in times of economic turbulence.  Developers in Miami (and other markets) built a massive amount of high end condos on the thesis that there was a virtually limitless pool of wealthy foreign buyers that would scoop them up.  There isn’t and now they are paying the price when currencies moved against them.  As an aside, we know of several large private equity investors that are sitting on their hands waiting for a higher level of distress in the Miami (and NY and San Francisco) high end condo markets.  At the moment, it appears as if that thesis is playing out the way that they expected. 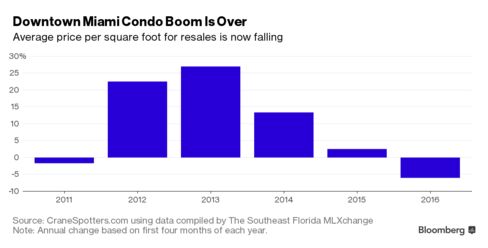 Future Leader: A 12-year-old who lit himself on fire and suffered severe burns says that he did it to get famous on YouTube.

Keeps Getting Worse: Chipotle has had a ton of bad press lately.  A girl finding a chicken foot in her burrito bowl won’t help.