Lead Story… Mortgage delinquencies and foreclosures have declined dramatically since the end of the Great Recession.  Per Calculated Risk, the combined percentage of home mortgages that are delinquent or in foreclosure has dropped to 4.5%, after peaking at over  10% back in 2010.  However, there is one mortgage artifact of the housing bubble that is still with us, at least for a few more quarters: HELOC recasting.

First a little bit of background on how HELOCs work:  Per Bankrate.com, a HELOC is home equity line of credit. It is a loan, using your home as collateral, that lets you borrow up to a certain amount, rather than a set dollar amount.  It allows for flexible borrowing of one’s home equity at a low, floating rate.  HELOCs are recorded as a 2nd Deed of Trust.  They have a borrowing period of 10 years after which, additional borrowing is no longer allowed and they recast or begin to amortize, typically over a 15-year period.  During the bubble underwriting on these things was bat shit crazy (that’s a technical term) and sometimes allowed for advance rates of  100% of appraised value (I still can’t understand how someone thought this was a good idea).  HELOC origination volume was off the charts during the bubble and everyone involved from borrower to bank seemed to assume that the loans would never actually make it to the recast period. Everyone assumed that the borrower would either refinance or sell the home to pay off the HELOC – the home mortgage example of the banking truism that “a rolling loan gathers no loss.”  That assumption was accurate for a while but then the music stopped and HELOC lenders were the first ones to find themselves “out of the money” as values plunged.

The ability to refinance went away almost completely and HELOC origination slowed to a trickle.  The two things that HELOC borrowers had on their side were:

The problem is that the HELOC market never came back enough to absorb the loans that are recasting and there has been a tidal wave of such recasts beginning in 2014.  Many markets saw values increase substantially enough so that refinancing a first mortgage would pay off the recasting HELOC (hello coastal California!!) but many other more economically depressed areas of the country have not.  There has been a steady drumbeat of doom and gloom for several years about how HELOC recasts could trigger a banking crisis.  I was reminded of this while reading through Black Knight Financial Services’ Mortgage Monitor Report for March (emphasis mine):

“In 2017, 19 percent of active HELOCs are facing reset,” said Graboske. “This is the largest share of active HELOCs facing reset of any single year on record, although the approximate 1.5 million borrowers slated to see their HELOC payments increase this year is about 100,000 fewer borrowers than in 2016. With the lines beginning to reset this year and early into 2018, we’re seeing the last of the pre-crisis-era HELOCs that the industry has been focusing on since early 2014. After deceleration in early 2018, we will have a lull of several years in reset activity. On average, borrowers facing resets this year are looking at a ‘payment shock’ of about $250 per month over their current HELOC payments – more than doubling their current payments, in fact. Historically, those increases have impacted HELOC performance significantly; delinquency rates of 2006 vintage HELOCs – which reset last year – jumped by 74 percent. That was marginally lower than the 2004 and 2005 vintages, which saw delinquency rates rise by 90 and 88 percent, respectively. Payment shocks remain high for lines resetting in 2018 but then drop along with the overall volume of resets in 2019.

First off, that 19% of active HELOCs are resetting this year is a mind boggling statistic as are the increases in default rates in big recast years.  For those of you living in areas where prices have recovered, you are probably asking yourself why a HELOC borrower wouldn’t just refinance his or her loan.  The answer is that many who can already have. Others will wait until the last minute and some will try to extend the recast with their lender.  However, a significant portion will be stuck with a substantially higher payment than what they currently have.  More from Black Knight (emphasis mine):

“One thing that’s working in the 2007 vintage HELOCs’ favor has been the equity and interest rate environment of the last year. Rising home prices and low interest rates throughout 2016 have allowed borrowers to be much more proactive than in years past in terms of paying off or refinancing their lines to avoid increased monthly payments. For those still facing resets, however, equity continues to be a struggle. One-third of borrowers whose HELOCs will reset in 2017 have less than 20 percent equity in their home, making refinancing problematic. One in five have less than 10 percent, and one in 10 are actually underwater. Even that reflects improvement in home prices, though; last year 45 percent of borrowers facing reset had less than 20 percent equity and nearly 20 percent were underwater.”

I suppose that the silver lining here is that employment data has been good and wages are finally increasing, especially at the lower end of the employment market.  That being said, it sucks to have your long-awaited raise go 100% towards an increase in payment on a mortgage that you took out 10 years ago.  At this point in time, it’s nowhere near a big enough problem to engender a government backed solution a la HARP, nor, frankly should it.  We’ve already been through two years of the recast tidal wave and it hasn’t triggered the aforementioned looming banking crisis.  However, the recast tidal wave is just another drag on the low end of the market that still hasn’t recovered and just can’t seem to catch a break.

Leaving the Door Open: Tax withholding is surging, indicating that wages are on the rise and solidifying the likelihood of a Federal Reserve rate hike in June.

Lights Out: Left with no hope of repaying its creditors, Puerto Rico (finally) declared bankruptcy.

Easing Up: Fannie Mae is trying to make it easier for potential borrowers with student debt to get a home loan.

Staying Put: The popularity of aging in place remodeling continues to see it’s popularity grow.  Related: US housing wealth is growing for the oldest and wealthiest Americans, at the expense of everybody else.

Rise of the Machines: MIT researchers have created a robot that can 3-D print a basic house in a matter of hours.

Get Out: Millennials are leaving their mom’s basement at a faster pace than they have over the past few years.

Constant Evolution: When experts are wrong, it’s often because they are experts on an earlier version of the world.

Worldwide Bleeder: Despite firing 100 people last week and bleeding cable subscribers by the millions, ESPN is not doomed.  However, it’s business is going to look very different going forward.

Shrinkage: Subway’s store count is contracting for the first time, mainly because their food is trash.

Are new houses going to start getting smaller? 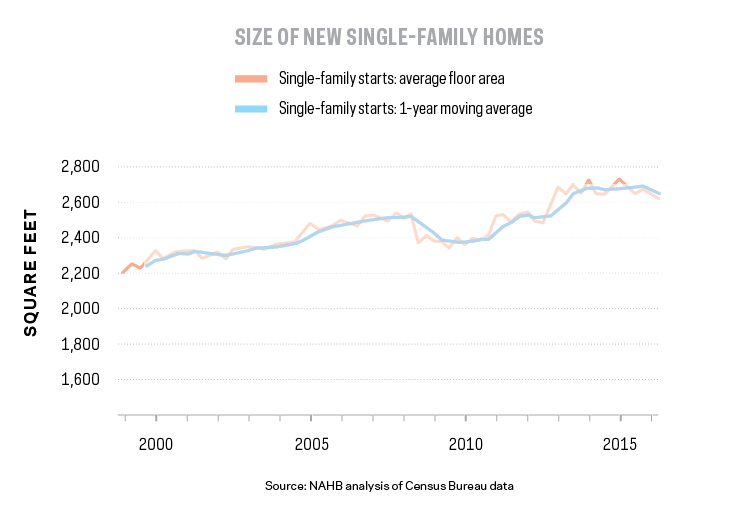 Your Prayers Have Been Answered: KFC has released a steamy romance novella for Mothers Day featuring Colonel Sanders.  Nothing goes together like awful fried chicken and romance novels.  Side note: KFC’s most profitable day of the year is Mothers Day. Side Note 2: The previous sentence is the most depressing thing I’ve ever written. (h/t Nicole Deermount)

He Who Smelt It: Former Chicago Cubs player David Ross got a nose-full when his Dancing With The Stars partner Lindsay Arnold farted in his face during practice.  For the record, this is probably the only thing that could get me to watch that garbage show.  (h/t Nicole Deermount)

Below Minimum Wage: An Arizona woman discovered a note from a Chinese prisoner in a purse that she purchased because, Walmart.  (h/t Ingrid Vallon)

Meanwhile, In Florida: This is an incredibly interesting way to hide a pipe filled with marijuana resin when you get pulled over.