Lead Story…. One universal truth about the financial industry is that it inhabits an ever-changing spectrum of fear and greed.  Real estate finance is certainly no different.  When greed is rampant, lenders bend over backwards to get money out the door so long as a perspective borrower can fog a mirror.  When fear rules the day, the process of obtaining financing is more akin to a full proctology exam.  People generally like to think that we learn from past mistakes.  However, when it comes to finance, memories are short and lessons generally only stick for a short period of time.  After that, they become lost in the dustbin of history or rationalized away by some variation of the ever-popular “it’s different this time” meme.  So, imagine my lack of surprise when reading a story this week about an Australian real estate financing scheme virtually certain to end in tears for all involved.  From Frank Chung at News.com.au (emphasis mine):

THE Australian mortgage market has “ballooned” due to banks issuing new loans against unrealised capital gains of existing investment properties, creating a $1.7 trillion “house of cards”, a new report warns.

The report, “The Big Rort”, by LF Economics founder Lindsay David, argues Australian banks’ use of “combined loan to value ratio” — less common in other countries — makes it easy for investors to accumulate “multiple properties in a relatively short period of time despite high house prices relative to income”.

“The use of unrealised capital gain (equity) of one property to secure financing to purchase another property in Australia is extreme,” the report says.

“This approach allows lenders to report the cross-collateral security of one property which is then used as collateral against the total loan size to purchase another property. This approach substitutes as a cash deposit.

“This has exacerbated risks in the housing market as little to no cash deposits are used.”

To clarify what is happening here: if an investor in Australia owns a rental property and wants to buy another, lenders are letting him or her cross collateralize the original property and use the equity from that initial property as a virtual down payment, negating the need for the investor to actually invest any additional cash.  When done in scale, this introduces a massive amount of risk into the system since it drives leverage ratios through the roof.

The first thing that you are probably thinking is how the hell is this going on when the housing bubble happened so recently?  Well, here’s a bit of perspective: that was the case in the US but not in Australia.  A fairly recent crisis is far less of an impediment to bad behavior when it happens in a different country thousands of miles away.  As the chart below shows, Australia had a brief market correction around 2008 but it’s housing market has been headed to the moon ever since, largely buoyed by massive inflows of capital from international buyers: 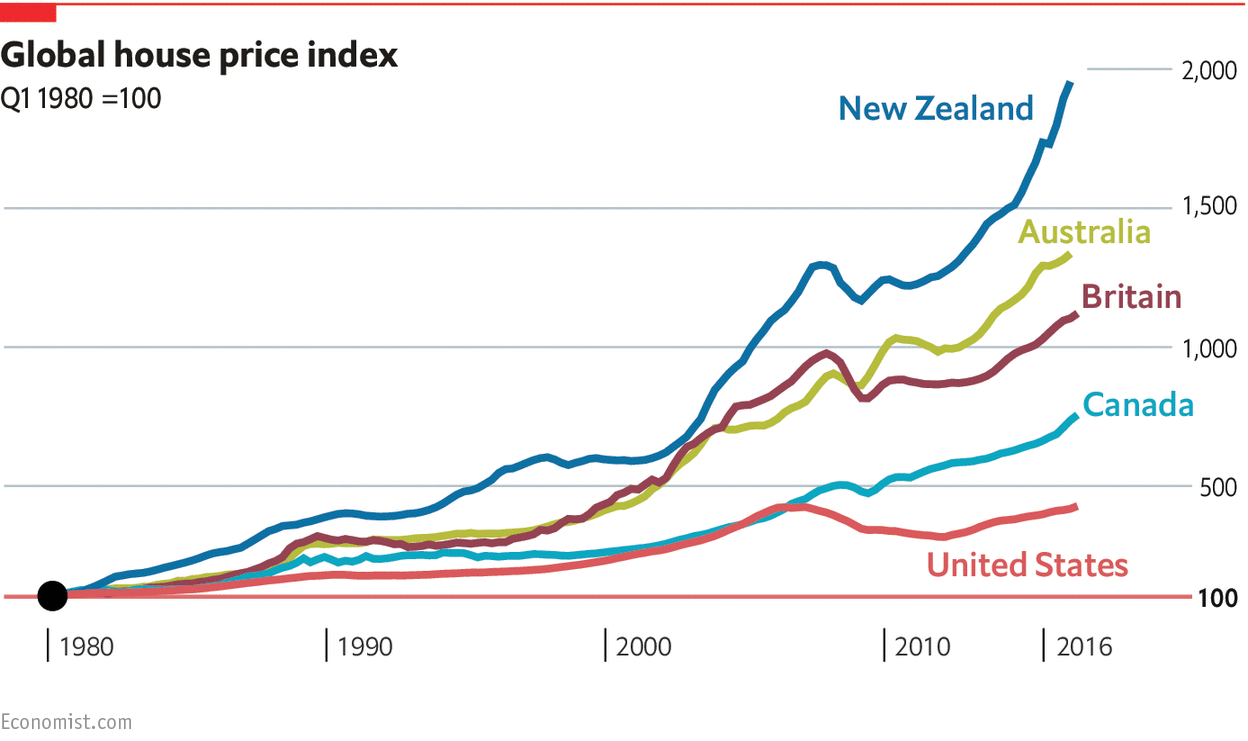 When I initially read the article quoted above, my first thought was whether or not rents are high enough there to cover expenses when properties are essentially 100% financed.  Short answer: they are not.  More from Frank Chung (emphasis mine):

“Profitability is therefore predicated upon ever-rising housing prices,” the report says. “When house prices have fallen in a local market, many borrowers were unable to service the principal on their mortgages when the interest only period expires or are unable to roll over the interest-only period.”

LF Economics argues that while international money markets have until now provided “remarkably affordable funding” enabling Australian banks to issue “large and risky loans”, there is a growing risk the wholesale lending community will walk away from the Australian banking system.

“[Many] international wholesale lenders … may find out the hard way that they have invested into nothing more than a $1.7 trillion ‘piss in a fancy bottle scam’,” the report says.

The report largely sheets the blame home to Australia’s financial regulators, the Australian Prudential Regulation Authority and the Australian Securities and Investments Commission. “ASIC and APRA have failed to protect borrowers from predatory and illegal lending practices,” it says.

This is a “business plan” that is 100% reliant on substantial appreciation to be successful.  From the article, it appears as if many of these loans have a built in interest only period and aren’t even covering debt service during this I/O period.  Once the loan adjusts and begins to amortize, the borrower needs to refinance or sell.  Otherwise he or she will have to continue to feed the project (or have the loan negatively amortize) every month in order to cover the loss.  Such a business plan is successful if and only if the property appreciation is greater than the amount of cash or negative amortization needed to cover the negative cash flow.  Perhaps the worst part is that the market doesn’t even need to fall in order for a borrower to get wiped out (remember all of the properties are cross collateralized under this scheme).  Instead, the market simply needs to move sideways and, due to the negative cash flow and borrower’s inability to refinance in a flat market, the borrower will eventually default.

Notice that the regulators are already being blamed for not reigning in the banks and allowing predatory lenders to prey on borrowers.  Let’s be honest: these borrowers know exactly what they are doing.  They are trying to amass a portfolio of investment properties with minimal investment and as much debt as possible with a complicit lender taking on equity risk in order to get more dollars out the proverbial door.  This isn’t some middle class worker who was sold on the dream of home  ownership by a smooth-talking mortgage banker and got in over his head.  The lenders here are being blinded by greed and the borrowers are as well.  Both are 100% culpable for the mess that they are going to cause. I feel a bit like I’ve gone back in a time machine writing this post since it reminds me so much of the shenanigans in the US mortgage market back in 2005 and 2006 when negative amortization pick-a-payment loans were all the rage.  Our current system in the US is far from perfect and is still too restrictive thanks to the ongoing housing bubble hangover but thank God that US mortgage lenders aren’t doing what Australian lenders are.

Strategy Shift: In a tight labor market, companies are looking to set up in cities with large numbers of underemployed people who would leap at a new opportunity.

Contrarian: An unconventional Bank of International Settlements paper makes the argument that global demographics- which have played a role in driving global deflation – will change course and cause inflation to increase in the coming years.

Grinding Higher: US Median income has now hit a new high. but still isn’t much greater in real terms than it was in 1999.

Assessing the Damage: In the wake of hurricane Irma 25% of homes in the Florida Keys were destroyed and thousands more were damaged.  Meanwhile, millions of people in the Southwest were still without power as of early this week.

Trail of Disruption: Since being released 10 years ago, here are all of the things that the iPhone has helped to destroy.

Tightening the Noose: China is planning to ban the trading of bitcoins and other cryptocurrencies traded on exchanges after banning ICOs last week.  The country accounts for nearly a quarter of bitcoin trades and cryptocurrency was largely seen as a means to move cash offshore in light of capital controls from Beijing.

Subtle: When asked about Bitcoin at a recent conference, JP Morgan Chase CEO Jaime Dimon was quoted as saying “It’s worse than tulip bulbs. It won’t end well. Someone is going to get killed.”  Sometimes I wish that these corporate types would stop with the overly PC answers and let us know what they really think.  Contra: Dimon has trashed Bitcoin in the past and it’s nearly always been a buying opportunity.

However, wealth inequality has.

Strange Visual: Denny’s announced a new mascot this week that looks like a turd with eyes.  Actually, it look exactly like Mr. Hankey from South Park.

Keeper: A runaway bride in Great Britain was arrested after skipping town with 13,000 pounds of her fiance’s bachelor party fund.

Exposed: A married couple was busted for public indecency when they posted videos of themselves getting busy in public places online.  See Also: Nude model jailed for topless Egyptian temple shoot vows to keep stripping at holy sites.