Must Read: An effort to sell a first-of-its-kind tokenized ownership in a South Carolina student housing complex fell through because the lender couldn’t get comfortable with the ownership structure and nixed the deal.  Reminder: when it comes to real estate, simple is better.

Juggernaut: Despite high costs, regulatory burden and taxes, California is still the most innovative economy in America according to Bloomberg’s newest US State Innovation Index.

On the Precipice: The US dollar has held up well in recent weeks, despite weak incoming data and a strong dollar could be poised to wreak havoc on the global economy.

Pass It On: Just as expected, consumers bore the cost for US tariffs on washing machines according to researchers at the Federal Reserve and the University of Chicago.

Step in the Right Direction: A pair of bills with bi-partisan support that are currently working their way through Congress promise to make it easier for legal cannabis companies to access the banking system, which would be a huge deal for owners of cannabis-related real estate. This should have happened years ago and is frankly just common sense as the federal government should be doing everything possible to limit the potential for money laundering and also ensure that taxes are collected.

Re-Positioning: With prices for stabilized properties rising, industrial REITs and other industrial owners are increasingly investing in value-add and redevelopment plays.  See Also: Foreign investment in US industrial properties spiked 152% in 2018.

Must Adapt: Kroger, America’s biggest supermarket is struggling to compete in the age of online grocery shopping.

Hot Spots: The southwest in general – and Arizona in particular is seeing the most multifamily rent growth in the US.

Taking a Pass: Home values are way up, leaving tappable home equity at a record level.  However, a combination of rising interest rates, an aging population and changing attitudes about debt after the housing bust of a decade ago mean that almost no one is taking advantage of it by extracting home equity.

Priced Out: Rising rent in coastal California cities are outpacing teacher pay and leading to shortages in the classroom.

Growing Like a Weed: Any way that you look at it, marijuana is a growth industry.  See Also: In the age of legal marijuana, many employers are dropping zero tolerance drug tests.

Fascinating: Here’s a great infographic that shows the median age of the population in every country in the world.  The takeaway: the developed world is getting old and the developing world is really, really young.

Venti: More people than ever before are hooked on coffee.  However, massive production in Brazil, combined with currency volatility has created a glut of cheap, premium coffee.

With this growth rate, Human Feces is going to get a very high valuation in its next fundraising round as San Francisco’s strongest bull(shit) market marches on. 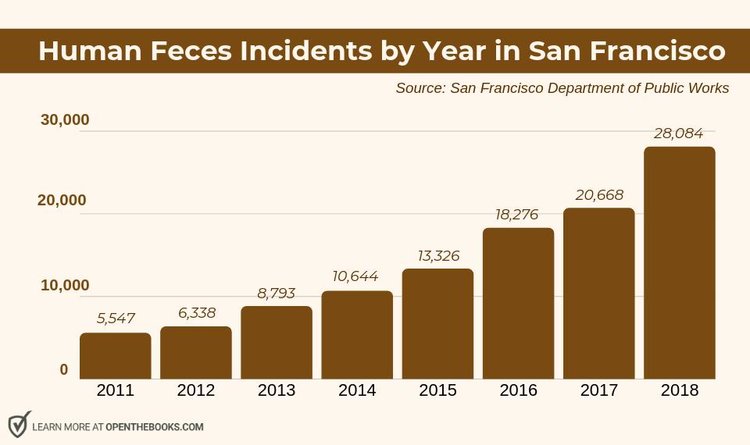 Cover Your Kids’ Eyes: The Easter Bunny beat the crap out of a guy outside of a nightclub because Florida.

It’s Always the Ones You Least Suspect: A man described as a ‘demon with fangs’ was arrested after a woman was found dead with bite marks on her neck.

Don’t Mess with Grandma: A 65 year old woman beat a half naked 300 lb burglar with a bat because Florida. (h/t Darren Fancher)

Raise the Voting Age: The ‘Shell On Challenge’ – where participants dare one another to eat plastic packaging, cardboard boxes and fruit peels – is the latest viral social media hit with teens.