Must Read: We’ve noted for a while that there is a strong trend of blue-collar workers leaving coastal California because they can either no longer afford to work here or need to commute for hours each way.  Now wealthy people are getting into the act as well.  The NY Times ran a feature story this week about how wealthy millennials who worked for companies like Uber and Lyft and will have substantial post-IPO gains are retiring early moving out of California to lower-tax states in droves to lower their capital gains exposure.

California is a large and diverse economy and state revenues will be massive this year thanks to a large number of unicorn IPOs.  That being said, its reliance on taxing high earners and capital gains for revenue is extremely volatile and likely unsustainable, especially once those high earners start moving elsewhere.  Eventually the piper has to be paid and the next downturn could be ugly.

Help Wanted: In a tight labor market, employers like Uber, Lyft, Postmates and Instacart could run out of manpower as high turnover plagues the gig economy.

Warning Sign?  Treasury had a bond auction sale of $27 billion in 10-year notes earlier this week and demand was poor to say the least.

Different Standards: Companies are valuing commercial real estate based on new criteria such as available skilled workforce in the market area and cubic feet (rather than square feet) for high-clear industrial buildings.  Slow-to-adopt appraisers and lenders are still exclusively using traditional metrics though. (h/t Steve Sims)

Under the Microscope: Now that WeWork is headed for an IPO, the fact that it is leasing buildings from it’s CEO (who sold shares to purchase said buildings in the first place) is getting the body cavity exam treatment. (h/t Stone James)

Size Matters: Over the past few years, big banks have been conserving capital for existing clients while small and mid-cap banks have been much more willing to lend on a transactional basis to grow portfolios.  A large part of this is due to regulatory inconsistencies that make it easier for smaller banks to lend on commercial real estate.

Cautionary Tale: Two years in, Portland’s stringent inclusionary housing policy has directly forced the city to fall even further behind in meeting its housing needs – both affordable and market rate by making projects un-affordable to build.

Slumping: Home price growth has continued to slow this spring despite mortgage rates falling substantially from their peak in 2018.

This is Remarkable: One out of every 11,600 people in San Francisco is a billionaire.  To put this into context, New York has the second highest concentration of billionaires at one in every 81,000.

Frothy: A former creative director for Netflix came up with a business plan to put water in a can, call it “punk” and raise $1.6MM in seed funding.  In related news, its becoming increasingly obvious that I chose the wrong profession.

It is truly incredible just how much of an outlier the bubble years were for cash-out refinances.  Its even more dramatic when you consider that Americans have more home equity now than they did then but are drawing only a small fraction of it. 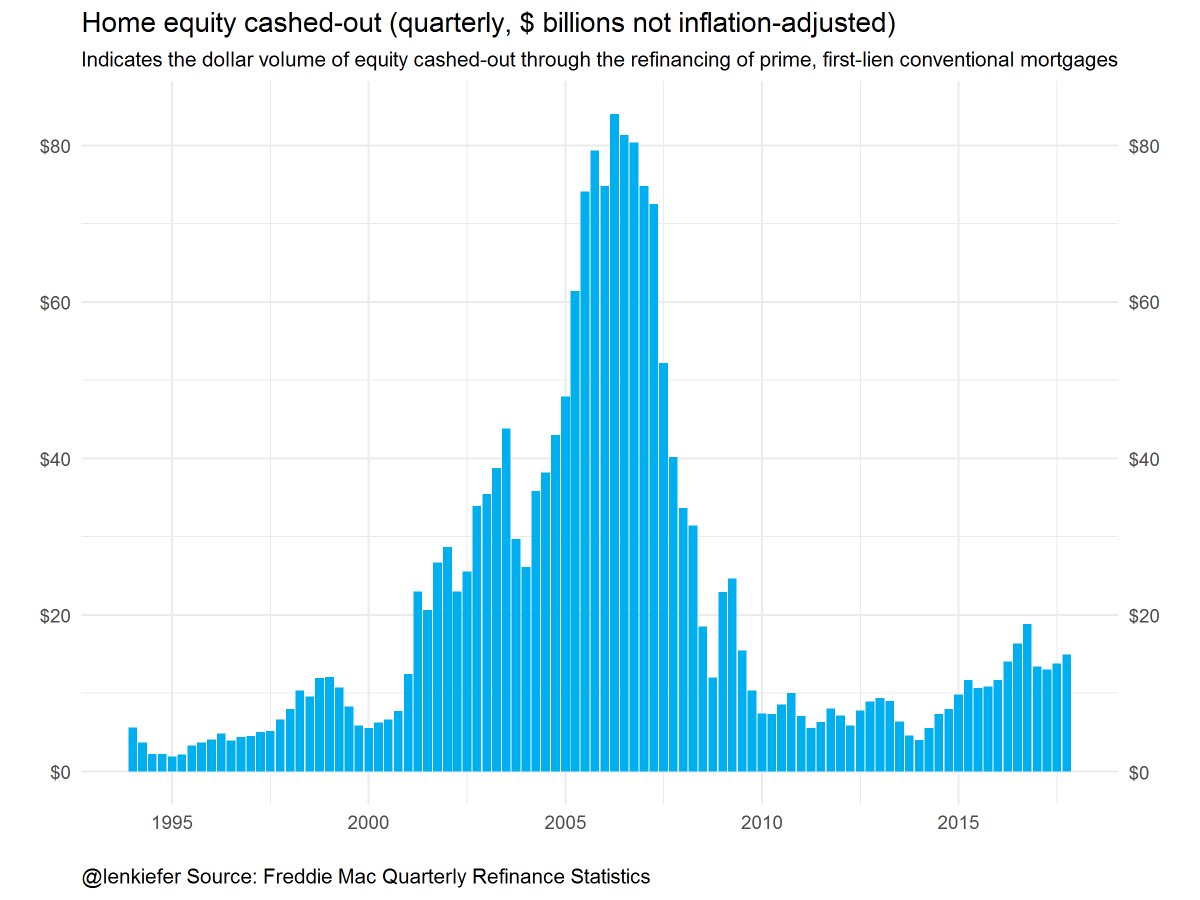 Joy Ride: A man who had alcohol and cocaine in his system and a drivers license license that had been suspended since the Carter administration was arrested for drunk driving after he crashed a riding mower into a police car because Florida.

Ivana Man: A woman was arrested after trespassing at the CIA headquarters three days in a row asking for ‘Agent Penis.’

Packing Heat: A woman pulled an alligator out of her yoga pants during a traffic stop because Florida. (h/t Almost Every Regular Reader of This Blog)

At Least He’s Being Honest: A man was arrested after refusing to remove a bumper sticker that read “I eat ass” from his car because Florida.  (h/t William Bussey)

Landmark Links May 10th – Rush for the Exits