Lead Story…. CIO Magazine posted a thought provoking piece last week about how first time private equity investment managers consistently outperformed established managers from 2000-2012.  Many of our investor clients are private equity funds and I worked for a commercial real estate pension fund advisor in a prior life.  Needless to say, this is a topic that fascinates me.  From CIO on how newer has been better when it comes to performance:

Newly launched private equity, private debt, real estate, infrastructure, and natural resources funds achieved a higher median net internal rate of return than established counterparts in every vintage year but one between 2000 and 2012, the report stated.

Private markets investors who took a chance on a brand new fund were rewarded with “strong (and in some cases, exceptional) fund performance, increased portfolio diversification, and experience with niche strategies,” said Leopold Peavy, Preqin’s head of investor products.

Overall, investors have grown more likely to invest with first-time managers, with more than half of surveyed investors saying they would at least consider committing to a brand new private capital fund, compared to 39% in 2013.

CIO didn’t give a reason for this outperformance but I have a theory as to why this happens, at least in the real estate world: Size matters.  A lot.  Most first-time funds are substantially smaller than established funds as they tend to attract less capital due mostly to a lack of investment track record.  Most managers aspire to grow their AUM because it means that they make more money.  Larger asset base = larger fees in dollar (if not percenage) terms.  However, while this growth in AUM might be a great deal for the manager, it isn’t such a great deal for their investors.  To illustrate why, lets look at the typcial life cycle of a fund:

The irony here is that the very thing that a manager wants – a lot of AUM is often responsible for suppressing returns as they grow.  It’s nearly impossible to have it both ways.  You can either beat the market by being relatively small and nimble or you can become a huge AUM machine.  It’s rare to have both.  Size matters a lot when it comes to real estate investment funds and it often correlates closely with how long they’ve been in existence.  It’s a lot harder to steer the Titanic than a Boston Whaler.

All About the Benjamins: Friday’s jobs report was pretty good despite the headline number coming in a little below consensus.  The big story: wages are rising.  See Also: What we know about the 92 million Americans who aren’t in the labor force.

Counter Intuitive: Will the rising number of retirees cause more inflation rather than less?  It’s not as far-fetched an idea as you may think.  See Also: Rising bond yields are telling us that inflation is returning.

Reading the Tea Leaves: How big data mining operations are combing social media and review sites to create a more detailed picture of US earnings.

A Different Type of Farm: How vertical farming technology could lead to higher demand for warehouse space and more efficient food production.

Easier Said Than Done: The McKinsey Global Institute thinks that they can “fix” housing in CA by targeting vacant land tracts in urban infill areas for high density development. Conor Dougherty and Karl Russell of the NY Times lay out why this is largely doomed to fail (and in some cases already has).

Rise of the Machines: This homebuilding robot being developed in Australia could lower construction costs substantially….but could eliminate some construction jobs.

Off the Grid: Tesla’s new solar roof tiles and battery packs could completely alter the way that America generates and uses home electricity.

Getting Out of Dodge: Tech workers and startups are getting out of Silicon Valley and moving to new markets with a much lower cost of living.  This isn’t going to have any impact on the Apples and Googles of the world but the next generation of small startups could come from much more diverse locations.

Tear Jerker: Meet the Cubs fan who drove 600 miles to sit in a cemetery and listen to the Cubs win the World Series with his father at his grave, keeping a promise he made decades ago.

Skimmed: Great profile from Bloomberg on how The Skimm (the first thing that I read most mornings) became a must-read for Millennials.

Nip and Tuck: More Americans 65 and older are getting plastic surgery than ever before….and not only in Newport Beach.

Charts of the Day 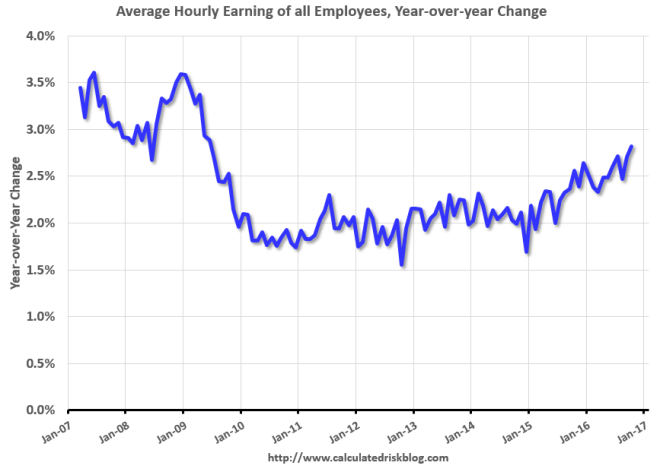 Squirrels Gone Wild: A squirrel went on a rampage in a retirement community resulting in a resident calling 911. Once again, because Florida.

Seems Reasonable: A drunk Russian man murdered and dismembered a friend for insulting his accordian skills because, Russia.

A Little Wired: A man was caught driving through a family neighborhood with wires attached to his genitals because, Florida.