Blah: Seven years later, the current recovery is still the weakest of the post WWII era.  This should come as no surprise if you know anything about credit recessions versus more typical inventory cycle recessions.  See Also: What is the shrinking yield curve really telling us?

Which Way From Here: Home ownership rates are now at 5-decade lows.  However, future demographic trends have led to a contentious debate over whether they are bottoming or have much further to fall.

That Sinking Feeling: San Francisco’s Millennium Tower, a 58-story condo project is home to A-list stars and tech titans.  The tower features units that sell for up to $10MM dollars a pop.  It’s also sunk 16 inches since completion in 2008 and tilted 2 inches to the northwest so buying a condo there (or being in the general vicinity of the building) might not be a great investment.  (h/t John Medford)

Ya Think: A new study finds that swimming in the LA River may be hazardous to your health.  In other obvious news, the water in the LA River is also wet. (h/t Chris Gomez-Ortigoza)

Useful Information: A new app called Weepo allows users to check the male-to-female ratio at a given bar or club before heading out rather that unwittingly ending up at a sausage party.

Hard Nut to Crack: Apple is struggling to gain traction in the TV space like it did in the music space as its assertive negotiating style alienates cable providers and networks.

You had better graduate if you take out a student loan.

Self Awareness Award of the Week: Paris Hilton thinks she is a target for ISIS, primarily because Paris Hilton is an idiot.

This Makes Sense: Arguably the best ping pong player in the world has a secret weapon: booze.

FAIL: Overeager animal rights activists purchased a 100 year old, 15 lb lobster from a Florida restaurant and shipped him to an aquarium in Maine in a styrofoam container with ice and gel packs.  The lobster was dead on arrival when he reached the aquarium because the activists didn’t have a clue as to what they were doing and didn’t include nearly enough ice.  This is a tragedy as I’m sure the lobster was delicious.

Lead Story… We’ve been talking a lot about the Bay Area market over the past few weeks and there are a few signs that some of the most egregiously expensive ones like San Francisco are nearing a breaking point where even well-paid employees can’t afford to live there anymore and may begin to leave.  A survey by the Bay Area Council published earlier this week found that 34% of Bay Area residents are considering leaving due to high housing costs and traffic.  I know that I’m starting to sound a bit like a broken record but….

“We can whine about this, or we can win by solving our traffic and housing problems,” Carl Guardino, president of the Silicon Valley Leadership Group, told The Mercury News. “The last time the Bay Area had seemingly solved its traffic problems was the worldwide recession of 2008. A recession is not how we want to solve our traffic and housing problems.”

I think it goes without saying that relying on massive global recessions to correct your cost of living and traffic issues is far from a viable long term solution.  For years now, service workers, educators, policemen, firemen, etc have been priced out of these and similar markets.  It should not come as a surprise that Bay Area school districts are facing a teacher retention crisis along with their housing crisis.  Teachers haven’t been able to purchase homes in the area for years.  Now they can’t afford to rent either.  Their salaries aren’t adequate to justify a long commute.  Cities have been aggressively increasing teacher pay but they can’t keep up with cost of living increases:

For a teacher earning $73,000 — the average teacher salary in the nine-county Bay Area — a rent payment of $1,800 would eat up 30 percent of monthly income. And just finding a rental at that price would be very difficult in this economy. The average monthly price for studio apartments in the Bay Area is $2,137, according to RealFacts, and two-bedroom, two-bath apartments are going for $2,850 — and for much more in hot markets.

“Every year we have a problem. It’s always a challenge to make sure that the schools are staffed,” said Jody London, an Oakland Unified school board trustee. “But with the rapidly rising housing market, the fact is it’s crazy right now. And it’s getting harder for teachers to stay in Oakland.”

And that’s in Oakland, which, while expensive isn’t close to Silicon Valley or San Francisco.  So how do you fix things?  Beyond building more housing  (which many younger residents are now in favor of much to the dismay of aging hippy NIMBYs), one idea is dramatically build out infrastructure to the outlying suburbs in order to fix the commuting issue and add more units where it is more affordable.    The BART is already being extended but this would require something far larger (and more efficient for that matter) in order to work.  From the Bay Area Council survey mentioned above:

Rather than building more housing in the Bay Area, 60 percent of residents say it should be built outside the region, with 84 percent saying they support stronger transportation networks between the Bay Area, Sacramento and other areas in the Central Valley to take pressure off regional housing supply.

“This is an understandable reaction to decades of failing to keep pace even minimally with the Bay Area’s housing needs and the transportation to support it,” said Jim Wunderman, President and CEO of the Bay Area Council. “There’s now an entrenched misperception that our region doesn’t have the capacity to add the housing we need. What’s unfortunate is that pushing housing outside the region still doesn’t solve the problem of supply and affordability in the Bay Area. It simply means that fewer working families and workers in lower-income jobs can afford to live here. It hurts the diversity of our region and our economy. It also means workers are commuting longer and longer distances in their cars, which pushes up damaging carbon emissions.”

The issue is that it would cost a fortune, take forever to build and would likely lead to environmentalist/NIMBY lawsuits.  Think of this as a Marshall Plan to fix area housing…assuming that it can actually get done which is, IMHO a stretch.  What I can assure you won’t work is what the City of San Jose is currently doing.  Silicon Valley’s largest city (and the nations 10th largest) has a goal of building 35,000 new units between 2014 and 2023 with 60% of that total being affordable.  Sounds like a great objective until you get into the details.  Rather than incentivizing developers to build more units,  the city is charging them an increased impact fee of $17/sf on all housing built by those evil “for-profit” developers which will then go into subsidized housing, which is apparently what San Jose means when they say “affordable” since it gets incredibly difficult to build market rate housing that’s anything close to affordable when you start layering on fees. Naturally, developers are mostly staying away and the city built only 426 units of affordable housing last year, around 20% of it’s lofty goal of 2,100/year.

Back to my broken record: the only way to fix the affordability crisis is to build more units to satisfy the demand in the region.  That won’t happen so long as cities continue to hike fees to the moon and make the entitlement process increasingly difficult.

Leading Indicator: The Wall Street Journal has seemingly cracked the code to the health the tech sector: sales of ping pong tables from a store in San Jose.  Lets just say that the tables have turned.  I bet you can find a great ping pong table on Craigslist though. 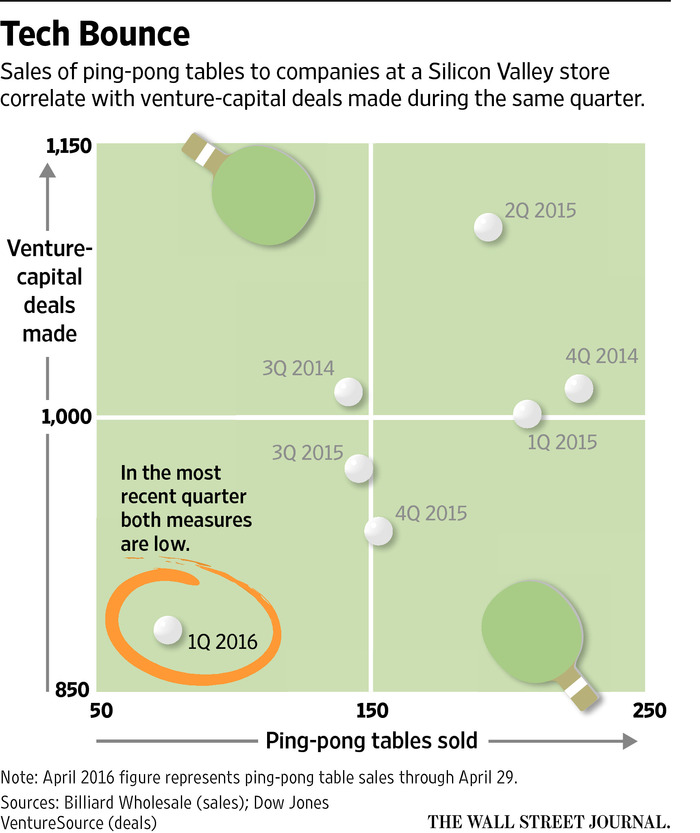 How Low Can You Go: Earlier this year, the dollar was on a tear as the Federal Reserve indicated that they would raise rates at least 4 times in 2016.  That likely isn’t happening as a sluggish economy plus mounting financial disasters abroad have made the Fed increasingly dovish, sending the greenback into a tailspin and leaving it at a 15-month low.  Interest rates and mortgage rates have both stayed low now that sluggish growth appears here to stay for the foreseeable future.  If dollar depreciation continues, one must wonder if a resurgence by foreign investors is in the cards.

Market Update: Our friends at JCR Capital see market fundamentals disconnecting from tepid investor appetite, creating opportunity.  As always, their quarterly market commentary is a must read.  It goes hand in hand with our comments about the land market versus the home sale market that we made previously.  In a related story, fundraising for private equity real estate funds is slowing.

Don’t Call it a Comeback: After starting the year off extremely poorly, CMBS loans for multi-family assets are making a comeback, albeit with tougher underwriting standards.

The Commercial Real Estate Market in Once Sentence: FOOP (Fear of over paying) is the new FOMO (fear of missing out).

Shots Fired: Bill Pulte, the founder and largest shareholder of Pulte Homes had some very pointed criticism of his hand-picked CEO Richard Dugas before the company’s annual shareholder meeting this week. Basically, Pulte accused Dugas, a former protege of being incompetent when it came to monetizing existing land positions, leading to poor company performance and demanded his resignation.  Analysts don’t anticipate Dugas leaving anytime soon.  In recent years, the company has focused on profitability over growth and was mostly sidelined from buying land positions in 2012-2013 when others were active.  Much of this stems from the Centex merger in 2009 according to the Wall Street Journal.  That transaction saddled the new company with a ton of land inventory that they had to write down effectively sidelining them from buying lots at a better basis when the market bottomed out.  They are still sitting on some of those lots today even while out buying more.

Hero: The next time that someone asks me why I like dogs more than people, I’m going to send them this:

A four-year-old white Labrador called Dayko has been hailed as a hero after rescuing seven people from the aftermath of the Ecuador earthquake – before dying from exhaustion.

I’m finding myself wishing that I was seeing more of this….

Finger Lickin’ Good: A woman in Florida (naturally) reported to local police that a chicken sandwich that she ordered “contained semen.”  Consider this a friendly reminder that fast food is disgusting.  Also, if you absolutely must eat at a KFC, don’t ask for extra mayonnaise.

Mistaken Identity: Villagers in Indonesia were disappointed to learn that an “angel” that fell from the skies is actually a sex toy.  The quote from this article is to good not to post:

The tale begins in Bangaii, days after an auspicious solar eclipse appeared over the region. A 21-year-old fisherman was walking the beach when he spotted a beautiful, lonely angel on the sand. Naturally, he took her appearance as a sign from heaven and he gently bundled her up and took her home.

There, he attired her in a blouse and skirt, which his parents changed daily as a sign of respect. Intrigued by reports (or maybe just really bored), local police visited the house to see the angel for themselves.

There, they made the less-than-holy discovery.

“It was a sex toy,” police chief Heru Pramukarno told a local newspaper.

What was unclear was whether that ruined or made the fisherman’s day.